Why are chromosomes
important?

Many IVF cycles result in disappointment as the embryos fail to implant or the pregnancy ends in spontaneous miscarriage. We now know that many of the transferred embryos are genetically abnormal (chromosomally unbalanced).

Our DNA is divided into pairs of chromosomes, one each inherited in the egg and sperm cell from our parents. An abnormal number of chromosomes (known as aneuploidy), resulting from the gain or loss of one or more chromosomes, is common in embryos following IVF. These genetically unbalanced embryos are generally not able to implant or develop into a healthy pregnancy and live birth. In some cases, however, pregnancies can occur but later miscarry or, in a small minority, result in abnormal pregnancy and live births. It is estimated that at least 50% of miscarriage are caused by aneuploidy in both natural and IVF pregnancies.

With advancing age, women in their late thirties and early forties are at a significantly increased risk that their eggs will have one or more aneuploidies. This leads to a correspondingly higher incidence of genetically unbalanced embryos following IVF.

Find out more about PGT-A 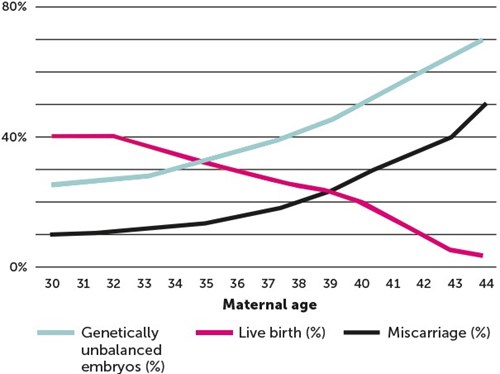